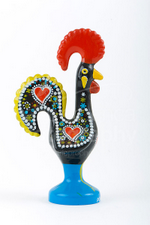 Have you ever wondered why the Portuguese are fascinated with roosters? Well legend says...

A murder had been committed in the Portuguese town of Barcelos. But who was the criminal? The mystery began.

A Galician was passing through Barcelos on a pilgrimage and various circumstances pointed to his guilt. The Spaniard of course declared his innocence but the man had no proof. Legend says that he was arrested and then condemned to hang.

The poor man continued to plead his innocence to no avail.  He begged to to be brought before the judge once again as his last opportunity.

The judge was dining with some friends and before them all the man again declared his innocence."There is nothing I can do" replied the judge. The Spaniard, seeing himself abandoned by man, turned to the Saints of his faith. He cried: "As surely as I stand innocent, so will that rooster crow!" Everyone laughed.

The feast continued, but for some reason the Rooster was not touched. Evening fell and the words of the man still rang in their ears. Suddenly, to the amazement of everybody, the roasted rooster transformed and...... crowed! The judge and his guests quickly ran to the site of the hanging just in time to save the condemned man.

Portugal gained a mascot from this day : a gaily painted ceramic "Rooster".