So the Olympics are almost coming to an end yet the para-lympics are still underway, and we at Oceano had the privilege of meeting some of the many talented athletes that took part!

We welcomed media from all over the globe incuding press and journalists from TV Record and Globo Brazil, Olympics production staff and Logistics teams from Angola, Mozambique, Brazil and Portugal, Spain amongst others.

We were very proud to have with us the Portuguese Judo team consisting of Telma Monteiro ( European Judo Champion and 2nd in World Ranking) and Nuno Delagdo former World Champion- well done guys for your efforts!

They were joined by the Portuguese Secretary of State for Sport.

The buzz and excitement surrounding this historical event for Britain continued when were joined by the two Portuguese silver medallist  Emanuel Silva and Fernando Pimenta . They made Oceano their first choice for a spot of lunch after their super triumph in the canoeing event- well done guys, you did us proud! 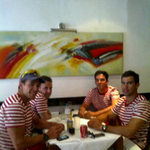 The Dutch Cycling team  (Gold medal winners) also  dined with us after their triumph at the Olympics 2012.